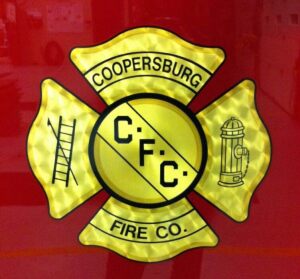 William H. Baer, 92, of Coopersburg, passed away on Sunday June 6, 2021 in his home surrounded by his loving family. He was the loving husband of the late Frances (Graber) Baer. Born in Bethlehem, he was the son of the late Philip and Sarah (Place) Baer. William was a graduate of Liberty High School. He honorably served his country as a Sergeant in the United States Marines.

William worked for Berman Trucking as a Diesel Mechanic, the Bethlehem Steel as a receptionist and guard, Fluck’s Hardware, Coopersburg and most recently for the Borough of Coopersburg, until retiring in February 2018. William was a past President and lifetime member of the Coopersburg Fire Company completing his 68th year of service this year, Treasurer of  Coopersburg Ambulance and a member of the Coopersburg Council and Water Authority. He also was a past President and Treasurer of the Southern Lehigh Jaycees. William was a devoted member of Trinity U.C.C., Bethlehem. He enjoyed spending time with his family, camping, fishing, telling jokes and a nice glass of bourbon.

Services: Graveside Services with Military Honors will be held at 11 A.M. on Monday, June 14, 2021 at Bethlehem Memorial Park Cemetery, 1851 Linden Street, Bethlehem, PA 18017.  William’s arrangements have been entrusted to the Cantelmi Long Funeral Home, Bethlehem. A memory tribute may be placed at www.cantelmifuneralhome.com.

Contributions: In lieu of flowers, contributions may be made to the Coopersburg Fire Company, 13 S. Main Sreet, Coopersburg, PA 18036.

To send flowers to the family or plant a tree in memory of William H. Baer, please visit our floral store.