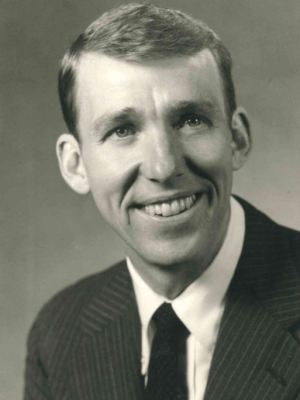 Jerry King, Professor Emeritus of Mathematics and Dean Emeritus of the Graduate School at Lehigh University, of Bethlehem, died on October 15, 2020. He was 85. He grew up in Murray, Kentucky, and worked his way through the University of Kentucky, where he fell in love twice: first with the subject of mathematics and then with Jane Connell. Five days after marrying Jane in 1962, he started his 45-year career at Lehigh, where he became Full Professor at age 32. He went on to serve as Lehigh’s Associate Dean of Arts and Sciences and then Dean of the Graduate School before returning to teaching in 1988. His work in the classroom earned him Lehigh’s two most prestigious teaching awards: the Stabler Award for Excellence in Teaching, based on nominations from undergraduate students, and the Deming Lewis Faculty Award, given by the 10-year reunion class to the faculty member who most significantly influenced their educational experience. He also was President of the Pennsylvania Association of Graduate Schools and a member of the Board of Governors of the Mathematical Association of America. A specialist in the areas of complex analysis and summability theory, he lectured nationwide and abroad, published many research papers and reviews, guided nine Ph.D. students, and wrote two books that introduce the beauty of mathematics to non-mathematicians: “The Art of Mathematics” and “Mathematics in 10 Lessons: The Grand Tour.” An athlete who played three sports in high school, he started running at 35 and became a sub-three-hour marathoner in his forties, ultimately finishing 25 Boston Marathons. His many passions included Shakespeare, Sinatra, the Bible, Robert Frost, Raymond Chandler, Happy Hour, film noir, storytelling, kids, grandkids, and all things Jane. Jerry shared his knowledge, joy and love of beauty daily, and his family takes comfort in a line from a favorite poem by Tennyson: “I am a part of all that I have met.”

SERVICES: A service will be held on Saturday, October 24, 2020 at 11:00 a.m. in Cantelmi Long Funeral Home, 500 Linden St., Bethlehem PA 18018, where the family will receive friends and relatives from 10:00 a.m. until the time of service. A face mask will be required for entry and social distancing regulations will apply. A live streamed service will be available; please visit www.cantelmifuneralhome.com and click on Jerry's picture. Interment will be private at Nisky Hill Cemetery.

CONTRIBUTIONS: Contributions may be made to the charity of one’s choice in Jerry's honor.

To send flowers to the family or plant a tree in memory of Jerry P. King, please visit our floral store.

Video is available for this event