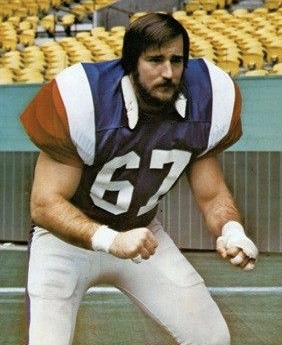 Daniel Yochum, Sr., 70, of Hellertown, passed away on Wednesday, August 26, 2020 at Saucon Valley Manor. Born in Bethlehem he was the son of the late George W. and Mary A. (Kardos) Yochum. Daniel attained his bachelor’s degree from Syracuse University where he received a scholarship to play football. He went on to become the second-round draft pick for the Philadelphia Eagles in 1971. Daniel opted to go to Montreal to play for the Canadian Football League’s Alouettes from 1972 to 1980. He was traded to the Edmonton Eskimos in 1980. Daniel was named All-Eastern Offensive Tackle in 1973 to 1978 and All-Canadian Offensive Tackle in 1975 to 1978. He was the recipient of the Schenley Award for Most Outstanding Lineman in 1976. Daniel was named a Grey Cup Champion in 1974, 1977 and 1980. He was inducted into the Canadian Football Hall of Fame in 2004. Upon returning to the United States and retirement from the Canadian Football League, Daniel opened up a bar before going into the Trucking Business. He was a member of West Side Moravian Church of Bethlehem. Daniel enjoyed spending time at the beach, a good debate, trips to Montreal with his family and a nice evening spent on his deck grilling. Daniel’s humor and play-on-words as his go-to will be sorely missed by all.

Services: A memorial service will take place at 11:00A.M. on Wednesday, September 9, 2020 in Cantelmi Long Funeral Home, 500 Linden Street, Bethlehem where the family will receive friends and relatives from 10:00A.M. until the time of service. Interment will take place at Bethlehem Memorial Park. A face mask will be required for entry and social distancing regulations will apply.  A memorial tribute may be placed at www.cantelmifuneralhome.com.

To send flowers to the family or plant a tree in memory of Daniel Yochum, Sr., please visit our floral store.