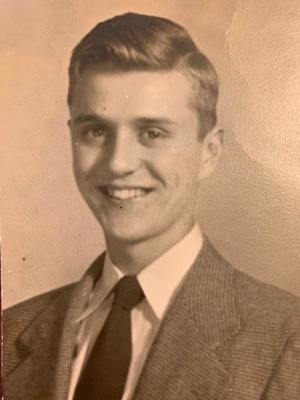 Dr. Theodore “Ted” G. Griggs, III, 87, of Bethlehem, passed away on Thursday, November 7, 2019, in Weston Nursing Center in Hellertown. Born in New York, NY, he was the son of the late Theodore G. and Doris (Hunter) Griggs. Ted shared 56 years of marriage with his wife Josephine W. (Wright) Griggs. He honorably served his country in the United States Army Medical Service Corp. during the Korean War. Ted attained his Doctor of Dental Surgery from Mt. Sinai School of Medicine. He practiced Oral Surgery in New York, NY and Bethlehem, PA.

Survivors: In addition to his wife Josephine, Ted will be lovingly remembered by his daughters, Meredith Keane and husband Bryan of Milford, NJ and Nicole Griggs and husband Patrick Roure of Paris, France; son-in-law, Michael Nowak; sister, Lindsay Mitchell and husband Ronald of Downington, PA; grandchildren, Roland and Liam Nowak and Owen Keane and many beloved nieces and nephews. Ted is preceded in death by his daughter, Samantha Griggs, and brothers, William “Nick” Griggs and Paul Griggs.

Services: A memorial service will take place at 11:00A.M. on Wednesday, November 13, 2019, in Cathedral Church of Nativity, 321 Wyandotte St, Bethlehem, PA 18015. Cantelmi Funeral Home, 1311 Broadway, Fountain Hill 18015, has been entrusted with arrangements. A memorial tribute may be placed at www.cantelmifuneralhome.com.

Contributions: In lieu of flowers, contributions may be made to Animals in Distress, 5075 Limeport Pike, Coopersburg, PA 18036.

To send flowers to the family or plant a tree in memory of Dr. Theodore "Ted" G. Griggs, please visit our floral store.